What fun would a baby shower be without some fun floral baby shower games? Well I imagine it would still be fairly fun but that’s not the point here. I’m assuming you want to play some games if you’ve come to this post, right? Games are a great way to encourage conversation and intermingling between your various friend groups and your family. They can be good for a few laughs too. By the way, if you missed out on the first post in this series about Floral Baby Shower Invites or the post about Floral Baby Shower Food why not go and check that out too. 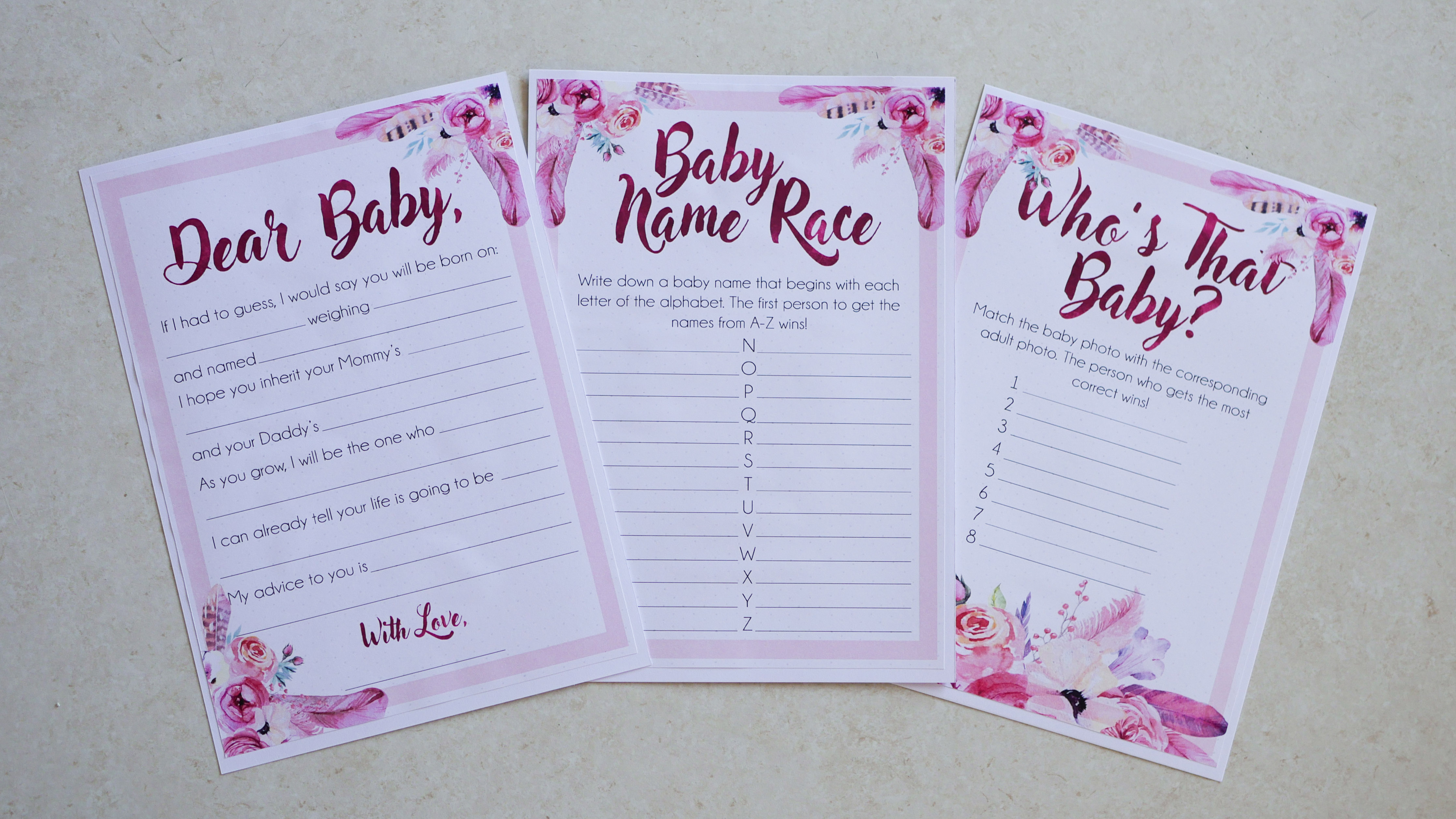 I had already been to a few baby showers by the time I planned my own so I wanted to shy away from some of the games I had already played one too many times. Namely the “Guess the Flavour of the Baby Food” game because eating bottled processed baby food is never really very fun! Instead the games I opted to include were Baby Jeopardy, Who’s That Baby?, a Baby Name Race, Dear Baby and just because I had the tape left over from my cousins baby shower I included the Guess the Mum-to-Be’s Waistline. 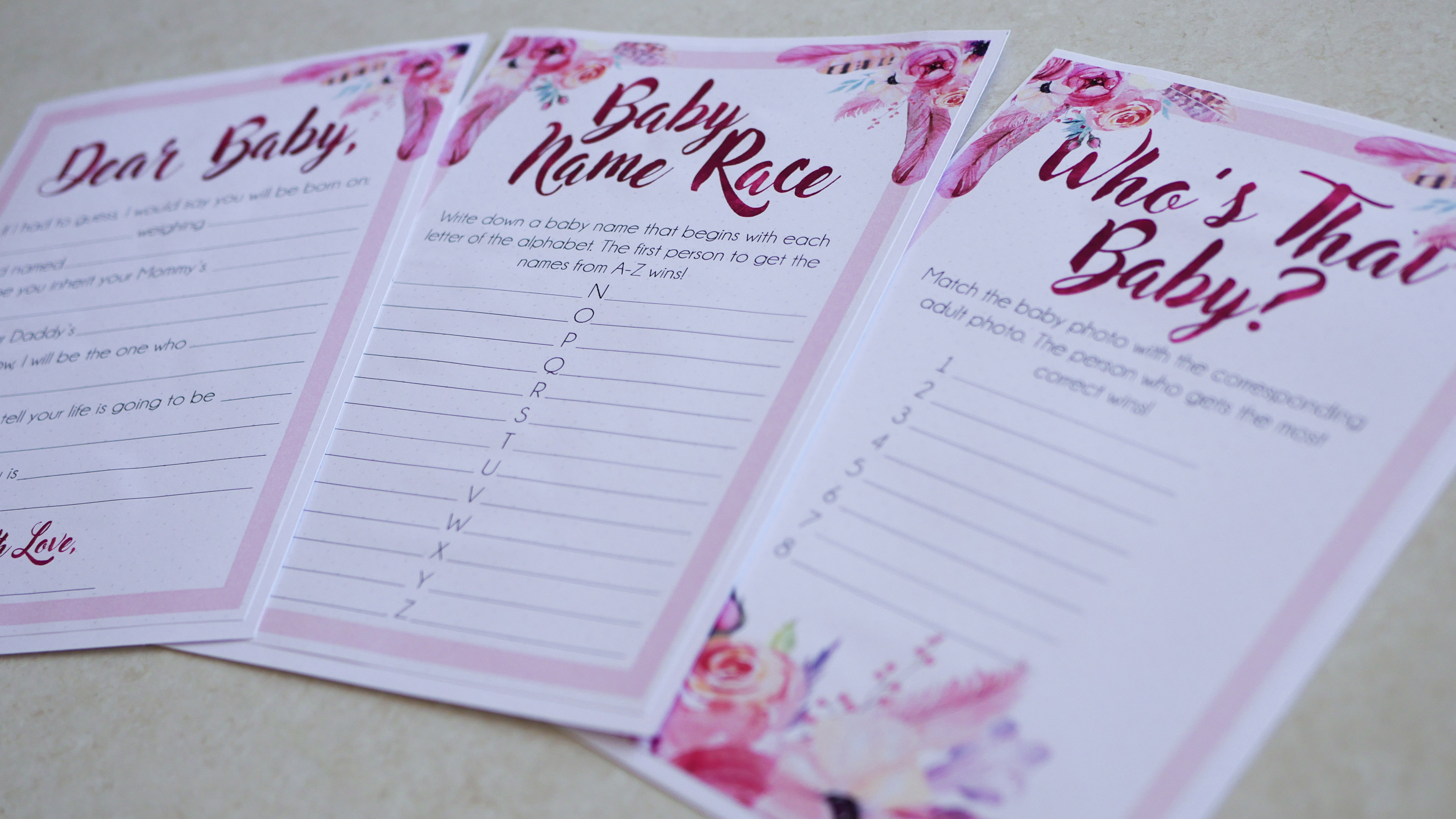 Dear Baby isn’t really a game but I include it here because it’s an easy printable for everyone to fill out that can be organised with the games. I printed most of these out 2 to an A4 page on standard paper. Then I cut them up and glued them to white card-stock so they’d be easier to write on. The Dear Baby is more of a keepsake so I kept that on it’s own but I used each different side of the card-stock for the Baby Name Race and the Who’s That Baby guessing card to save on costs.

The Baby Name Race is a fairly self explanatory game. There is space on the card from A-Z for the guests to come up with a baby’s name starting with that letter. The idea is you give out all the cards with pens to write with, start the race and the first person to fill out a valid name for each letter wins a prize. I allowed them to put both boys and girls names but I imagine you could make it harder for them by stipulating only girls names if you wanted. 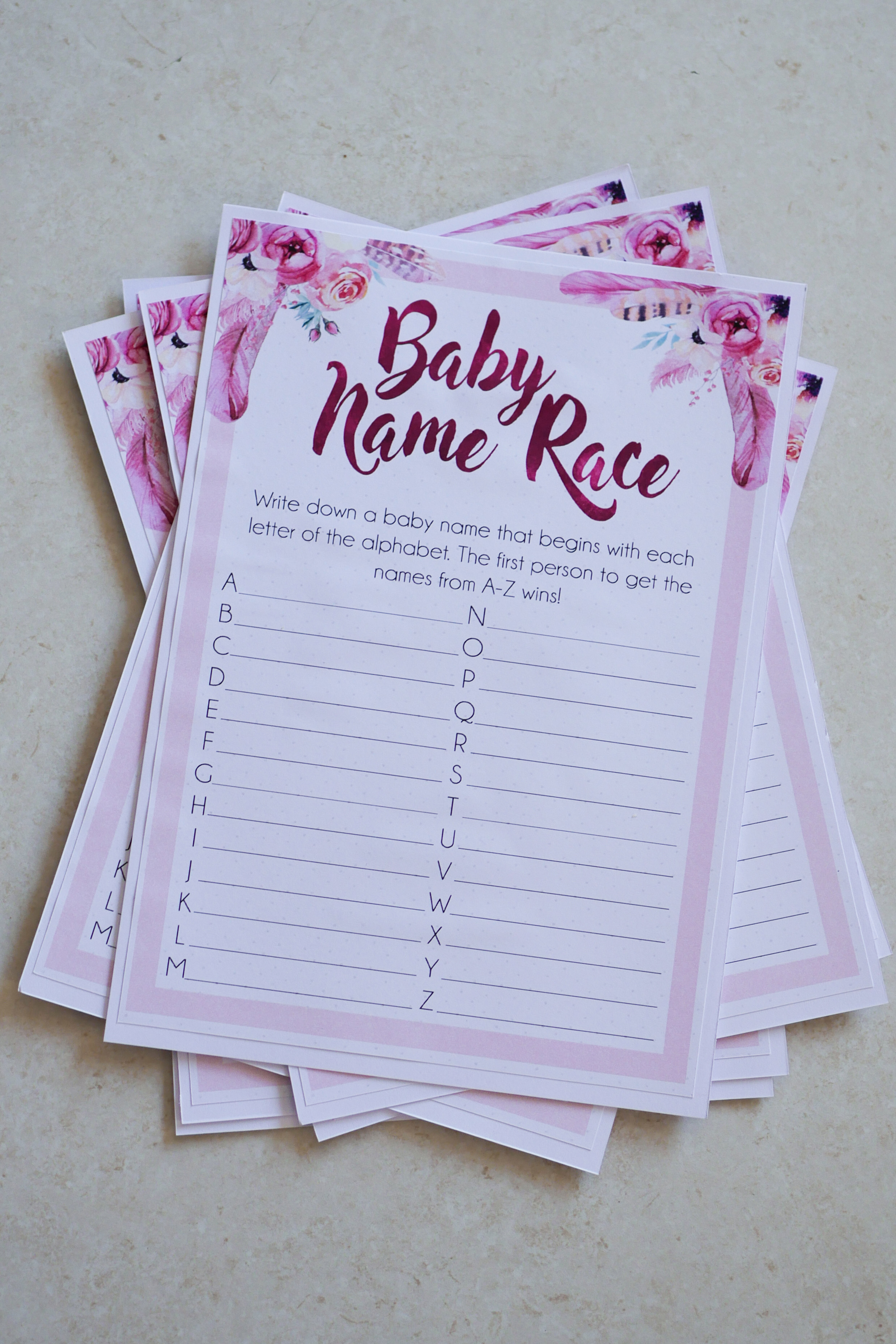 The mistake I had was having these out waiting to go so some guests started filling these in before the game actually started. I had to then give them new cards but I imagine they still had forewarning about thinking of some of the more difficult letters. Funnily enough though it wasn’t any of the ones with head starts that won so I guess it worked out ok. 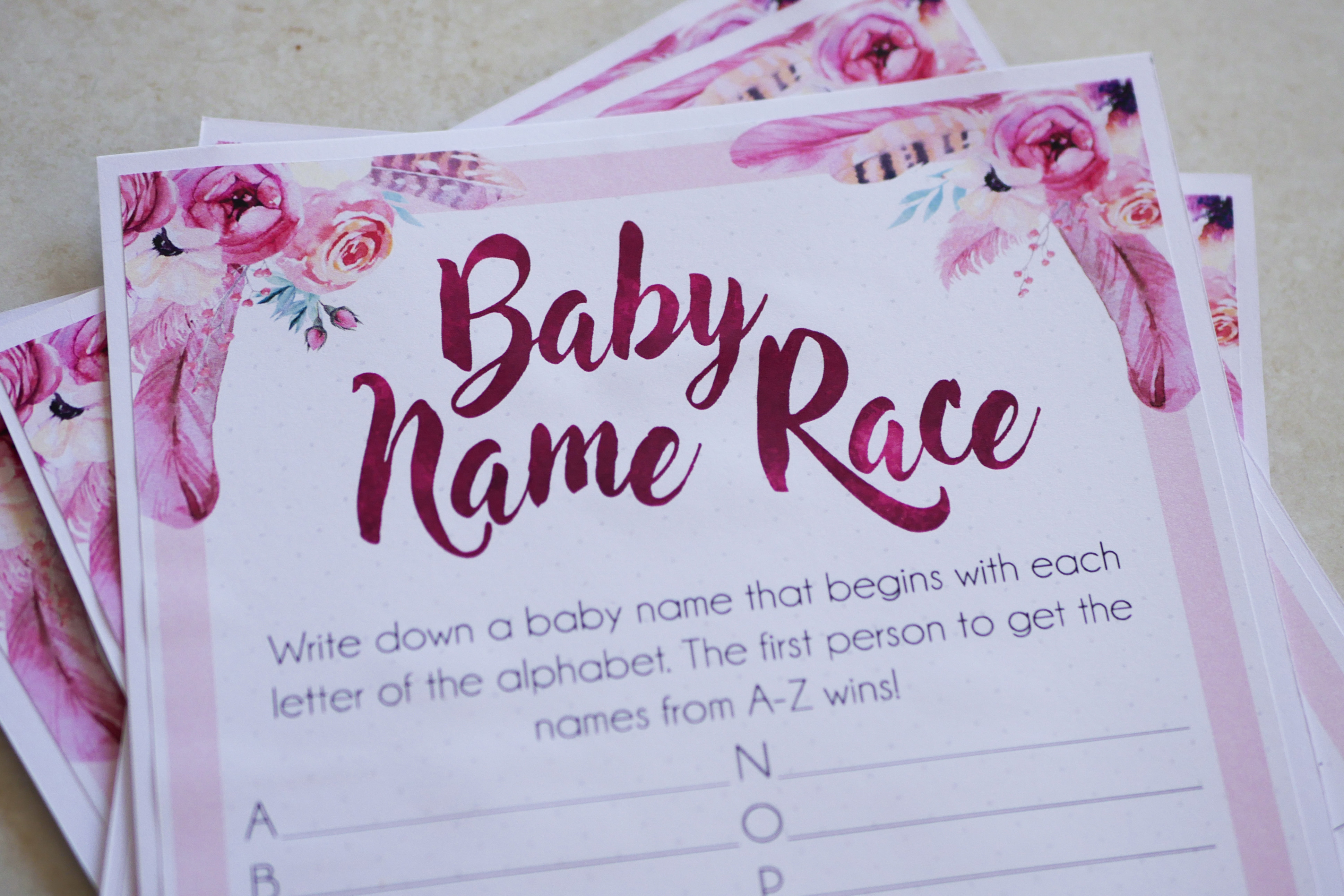 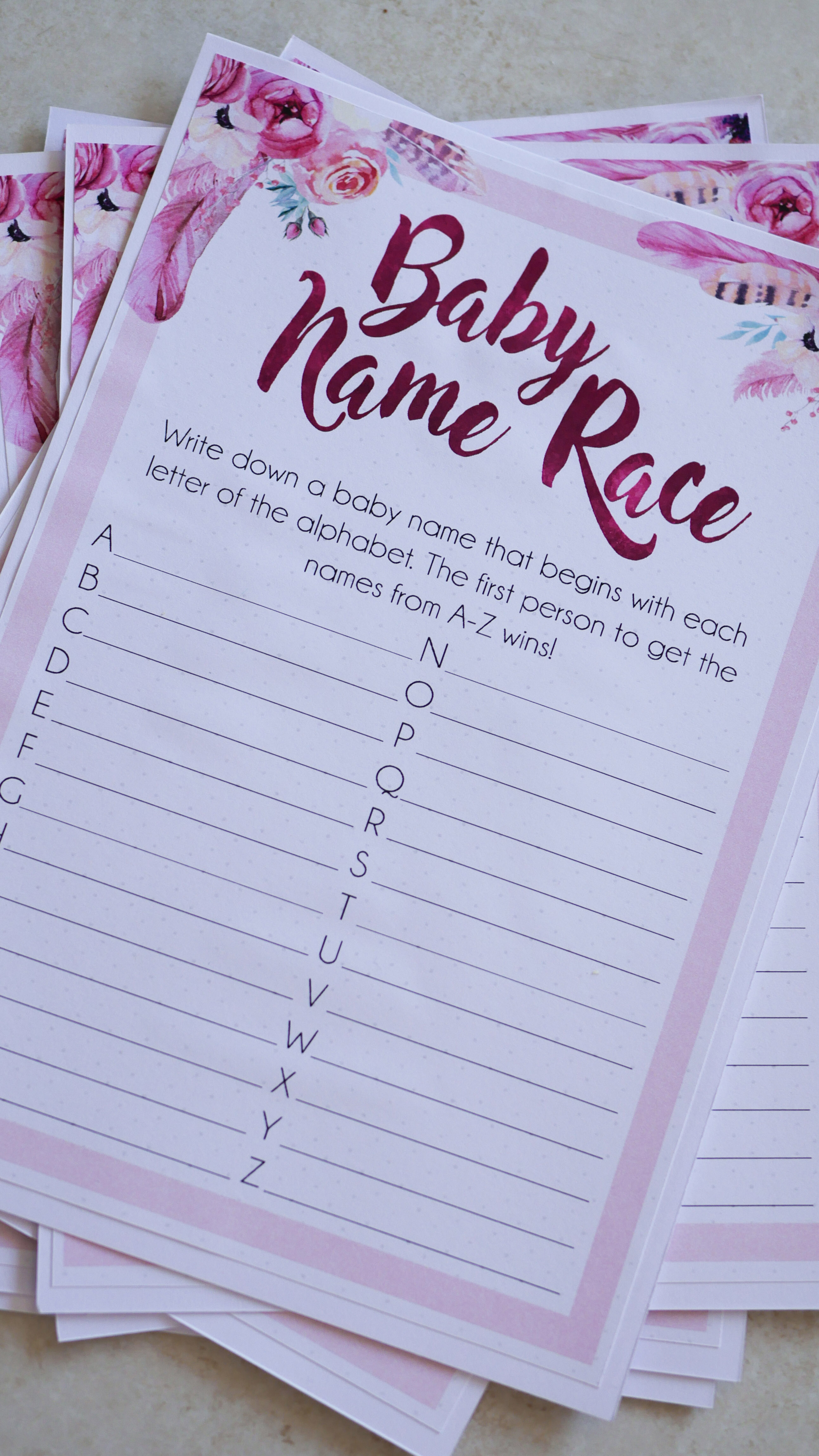 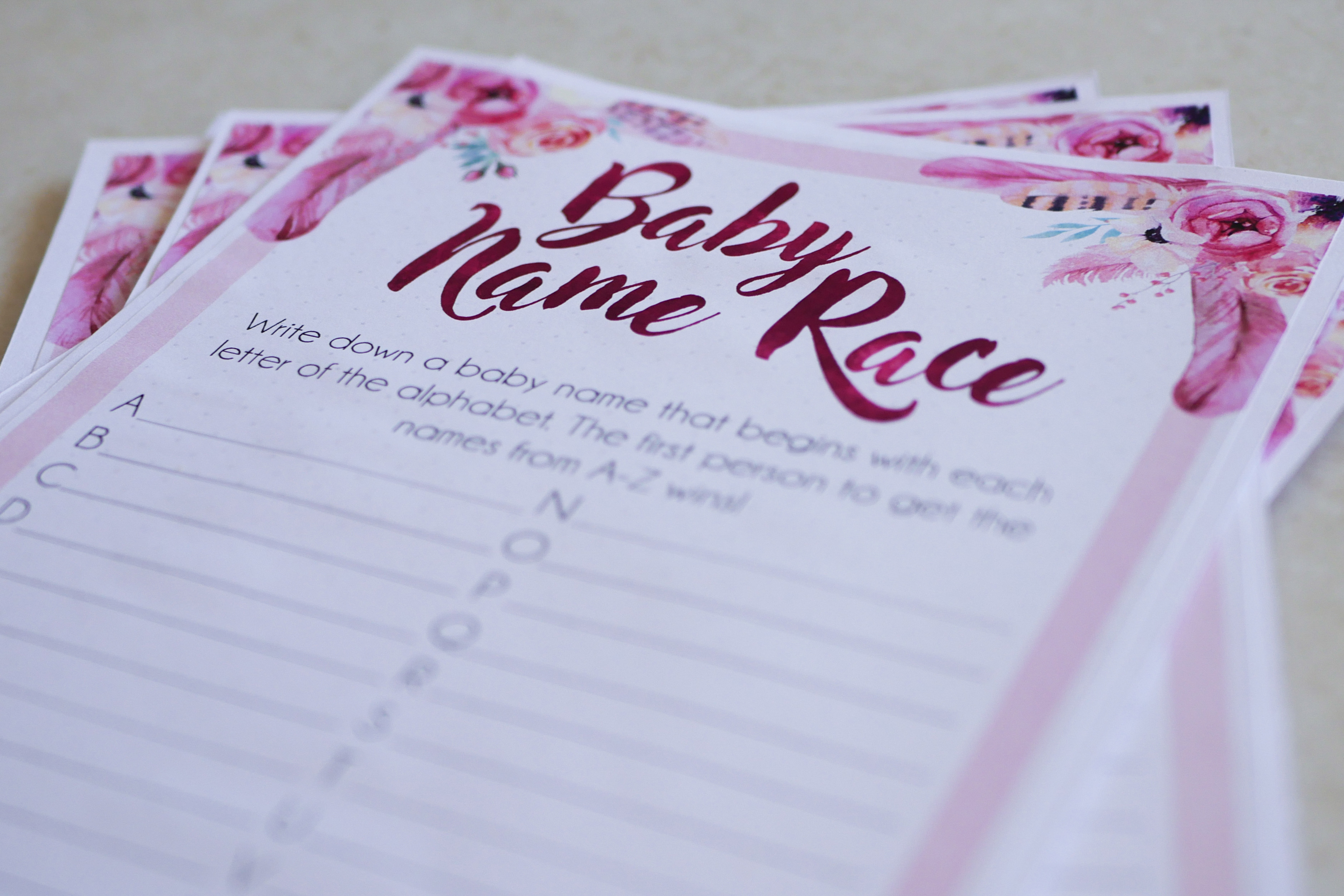 There are multiple ways you can play a game of Who’s That Baby. The first is you can ask each of your guests in your invitation to bring a baby photo of themselves on the day. When they arrive they give the photo with their names on the back to you or whoever is delegated to organising the game. You then pin them all up and have guests try to guess which guest resembles which baby photo. It would be really fun to see baby photos of everyone who comes but this way would be hard to organise.

The problem I have with this way is you don’t know in advance how many people will come and if they all actually will remember to bring a photo. The answer sheets are then harder to do up and keeping track of which photo is who might be confusing. On another note how do guests even answer if they don’t know who the other people at the party are? 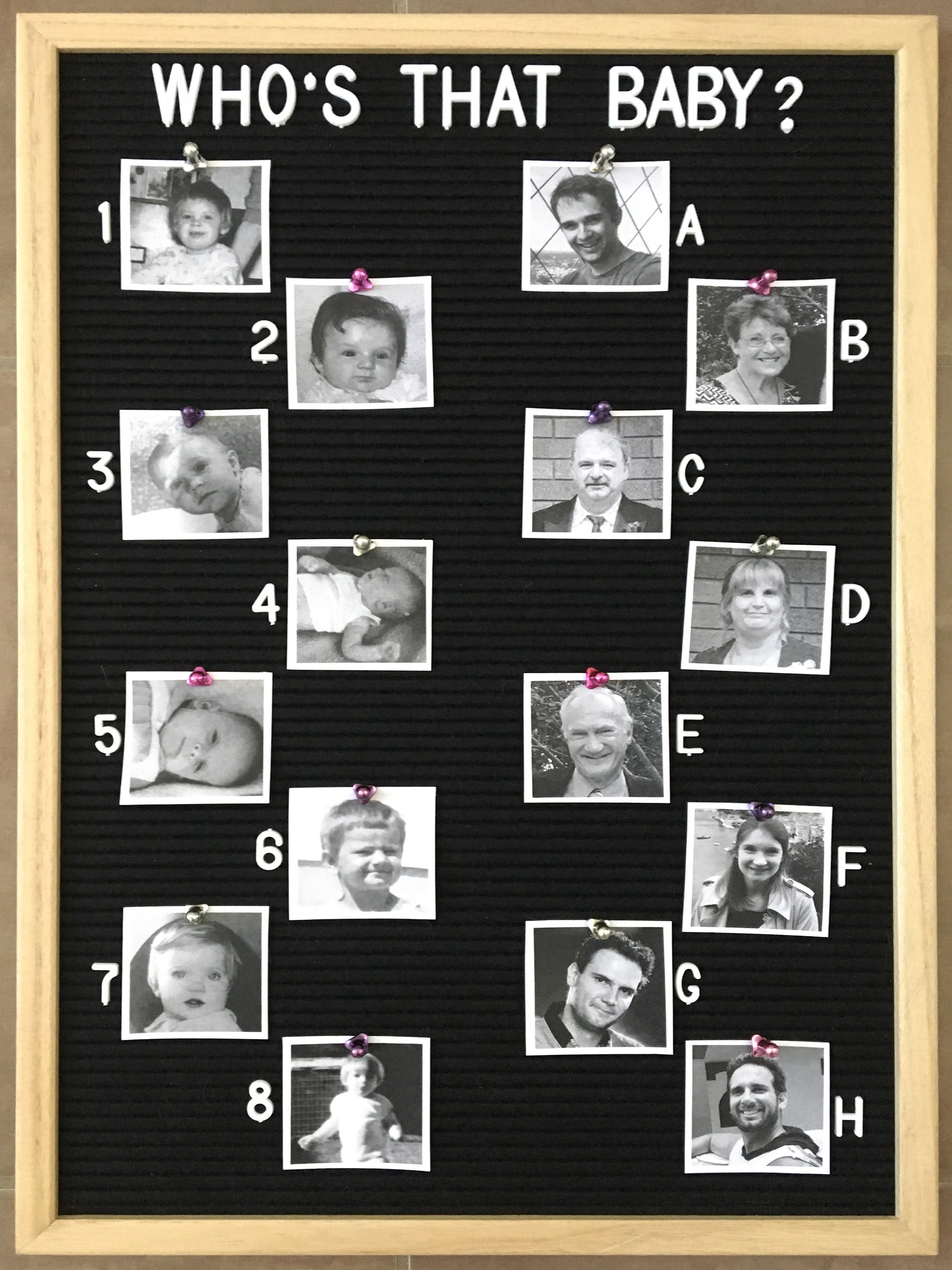 The second way to play this game and the way I went about it, is to collect baby photos of all the prominent relatives of the baby to be, the mum, the dad, the grandparents, any aunts and uncles. I then edited all the photos to be black and white so you couldn’t use the condition of the photo to guess the age of the person in it. I used the Kmart DIY letter board along with some metallic pins I already had to arrange these baby photos next to a recent photo of all the people in them. 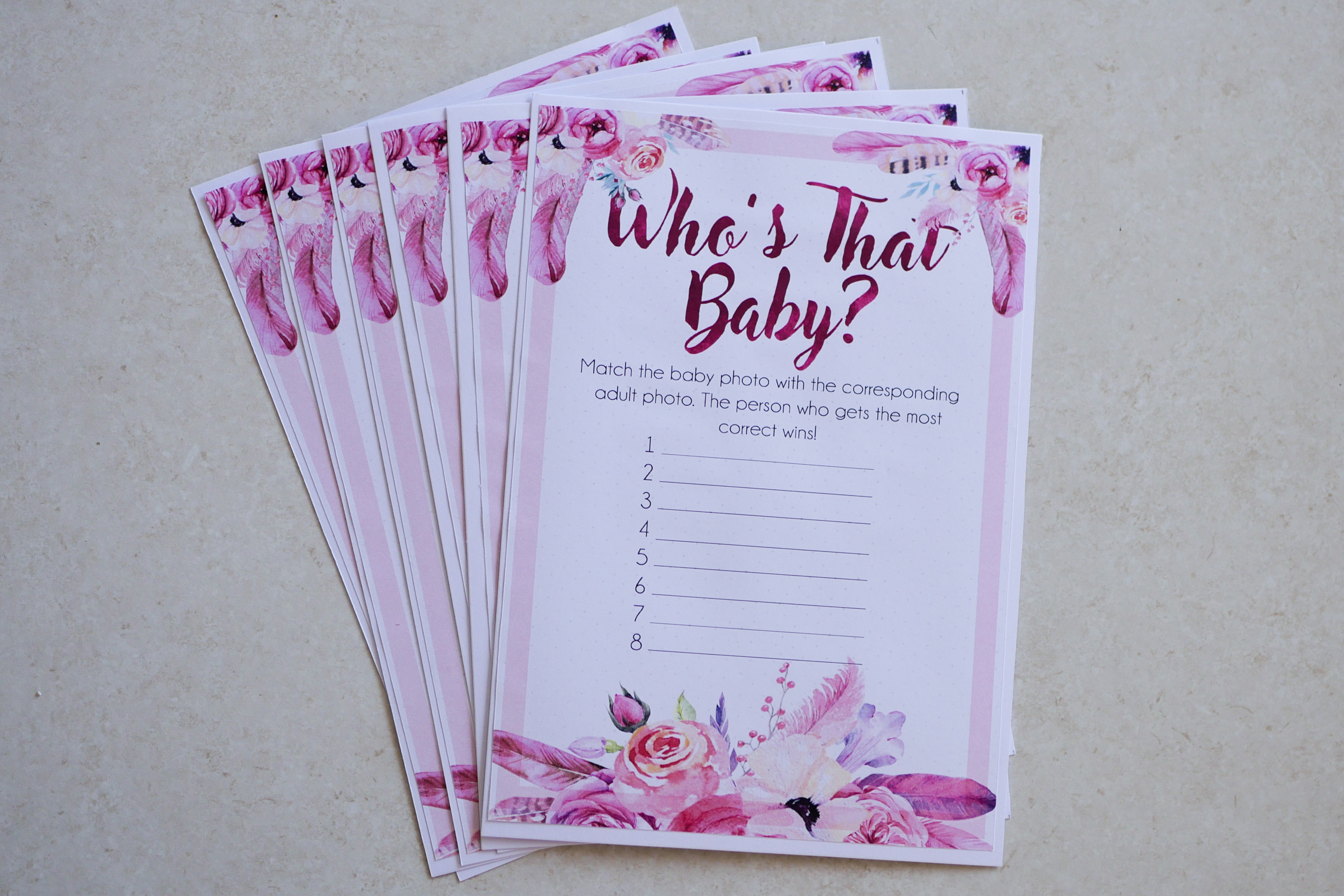 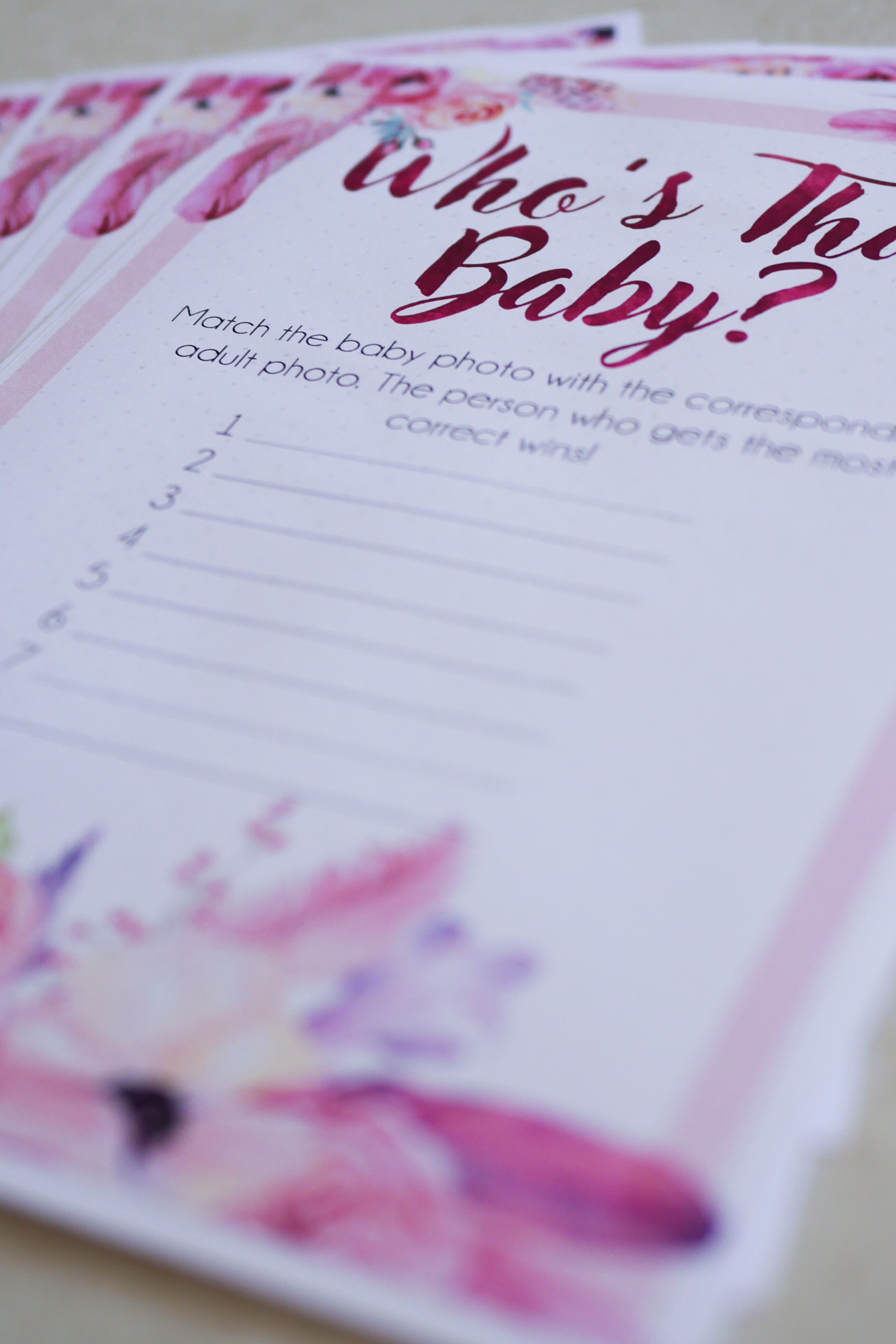 Each baby photo was assigned a number and the adult photos were assigned a letter. A lot of the people attending the baby shower didn’t necessarily know all the members in my family so I didn’t want to do it by name and give them any disadvantage. I tried to choose baby photos that were as young and non gender identifying as possible to make it really difficult. 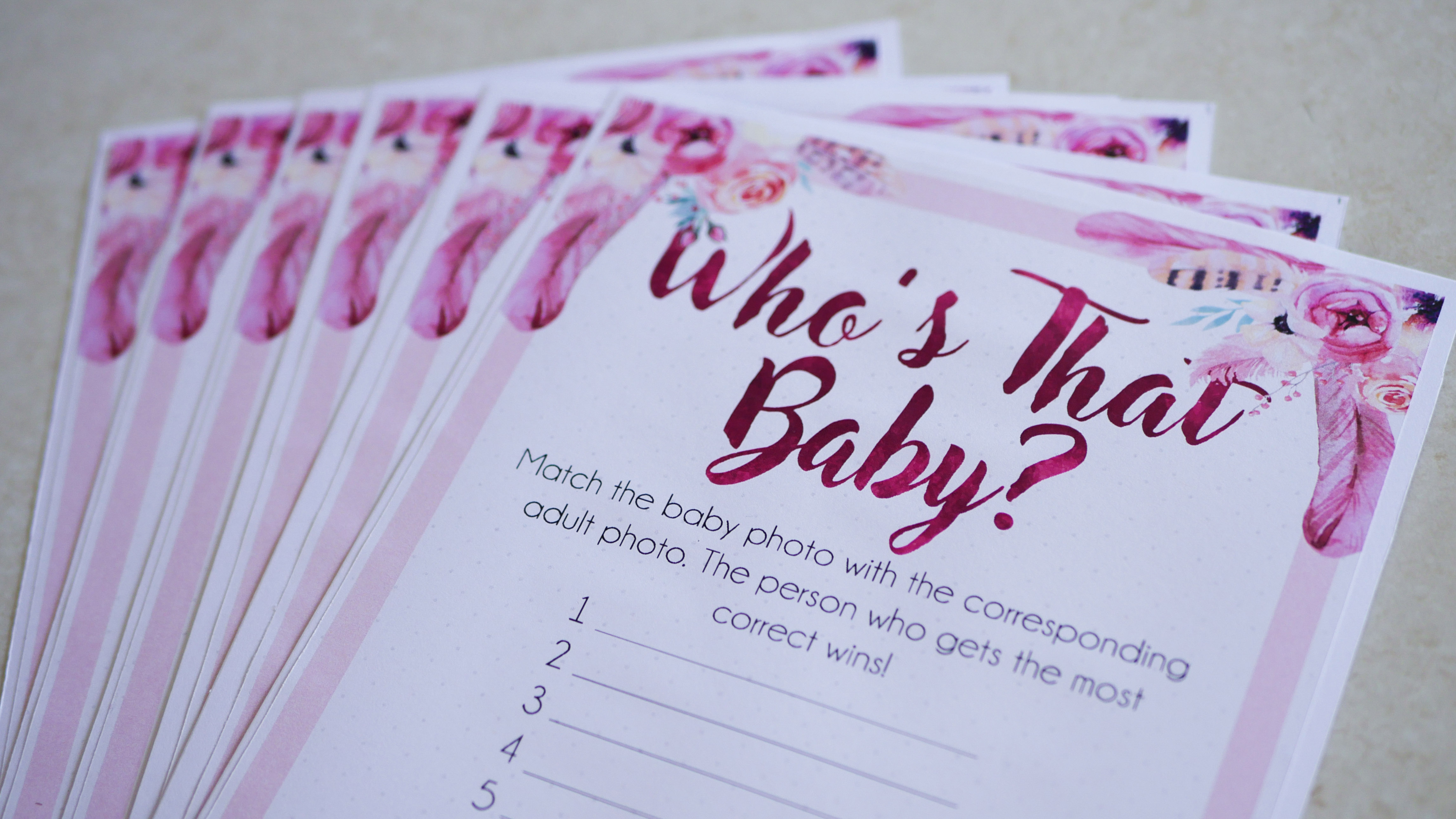 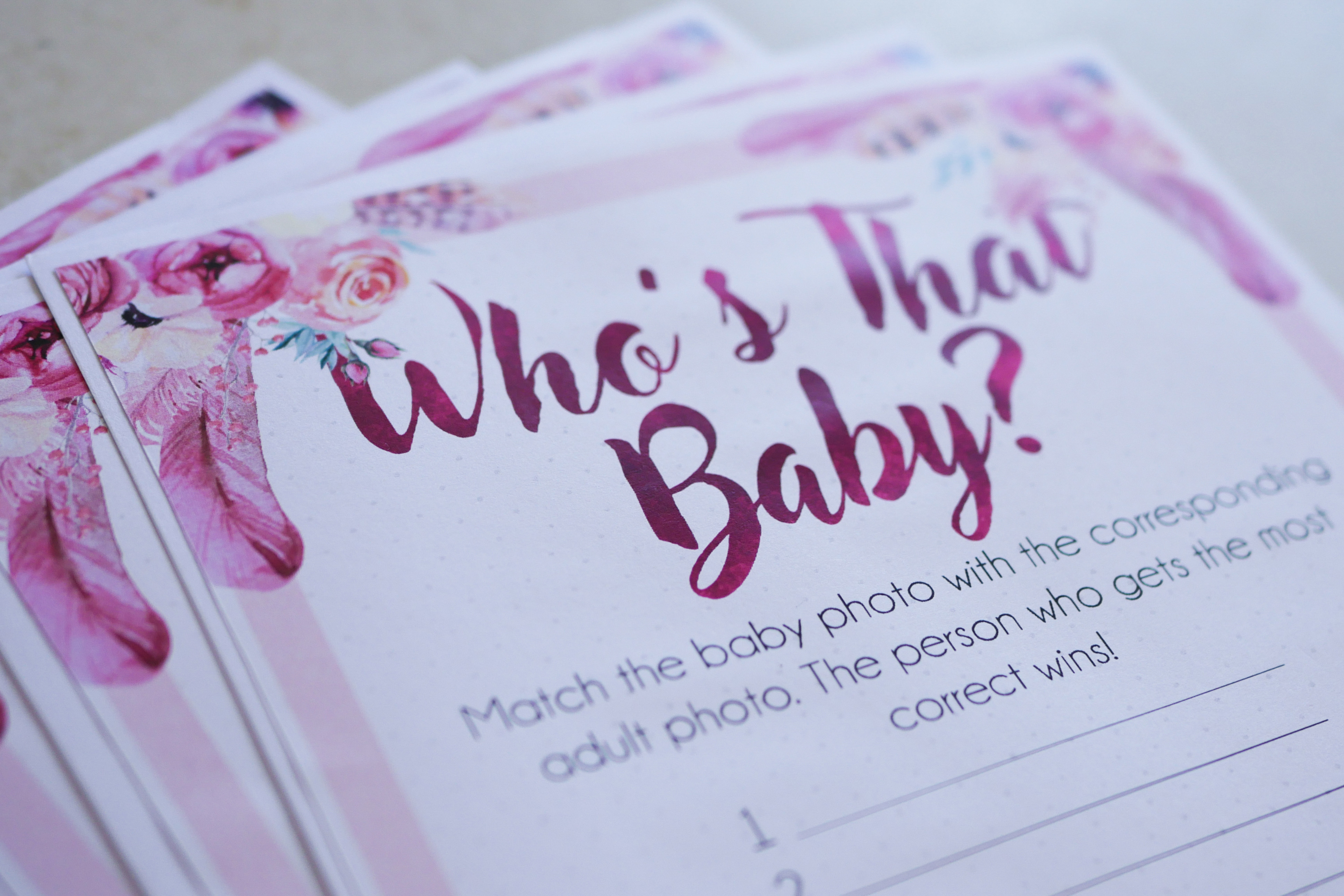 Dear Baby is just a nice and easy fill in the blanks prediction keepsake for all the guests to fill out. There aren’t any winners or losers because you can’t really tell if people have guessed the date, name or weight of the baby correctly until the baby actually comes. It is really nice to read back what people have filled in so I would highly recommend this one! 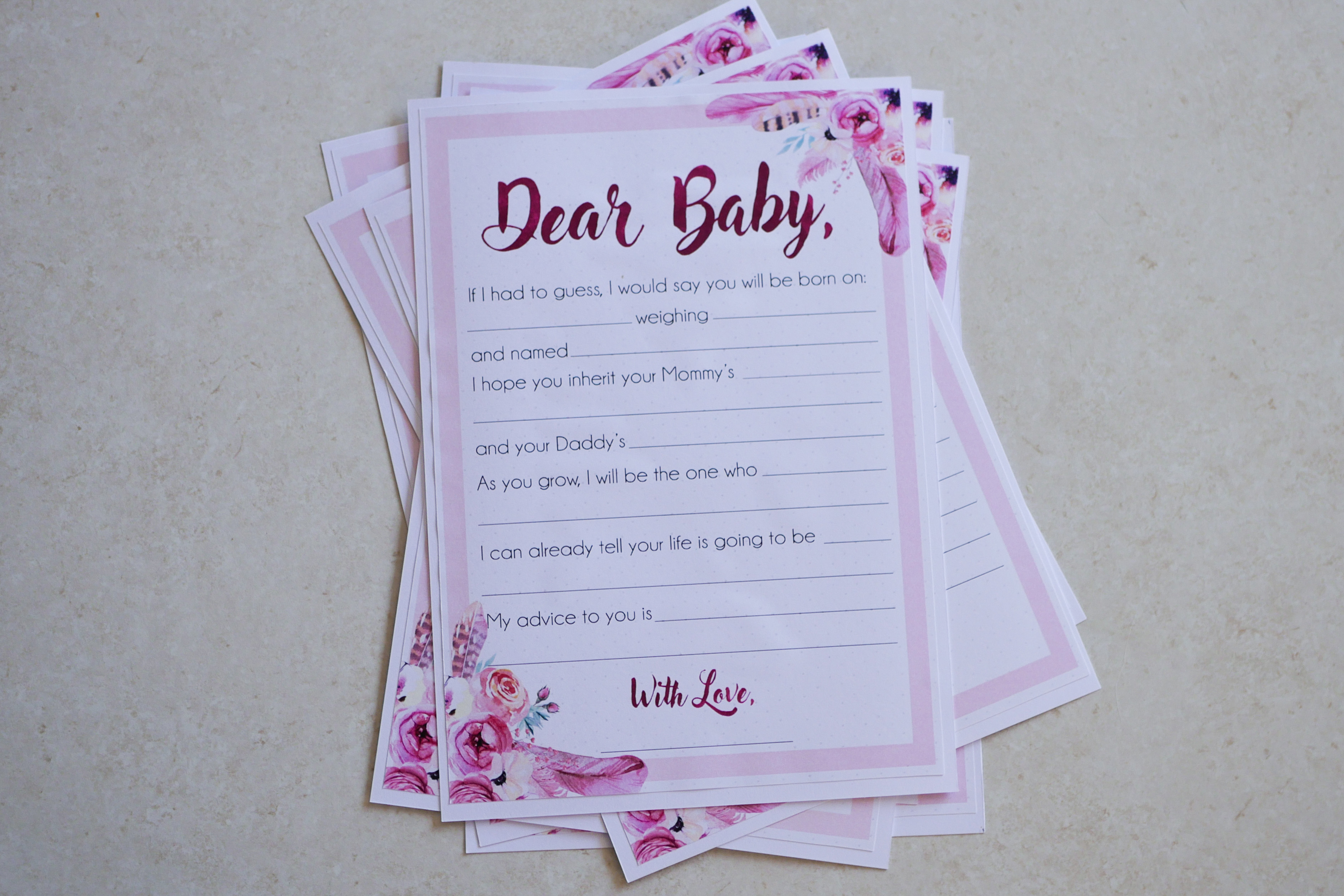 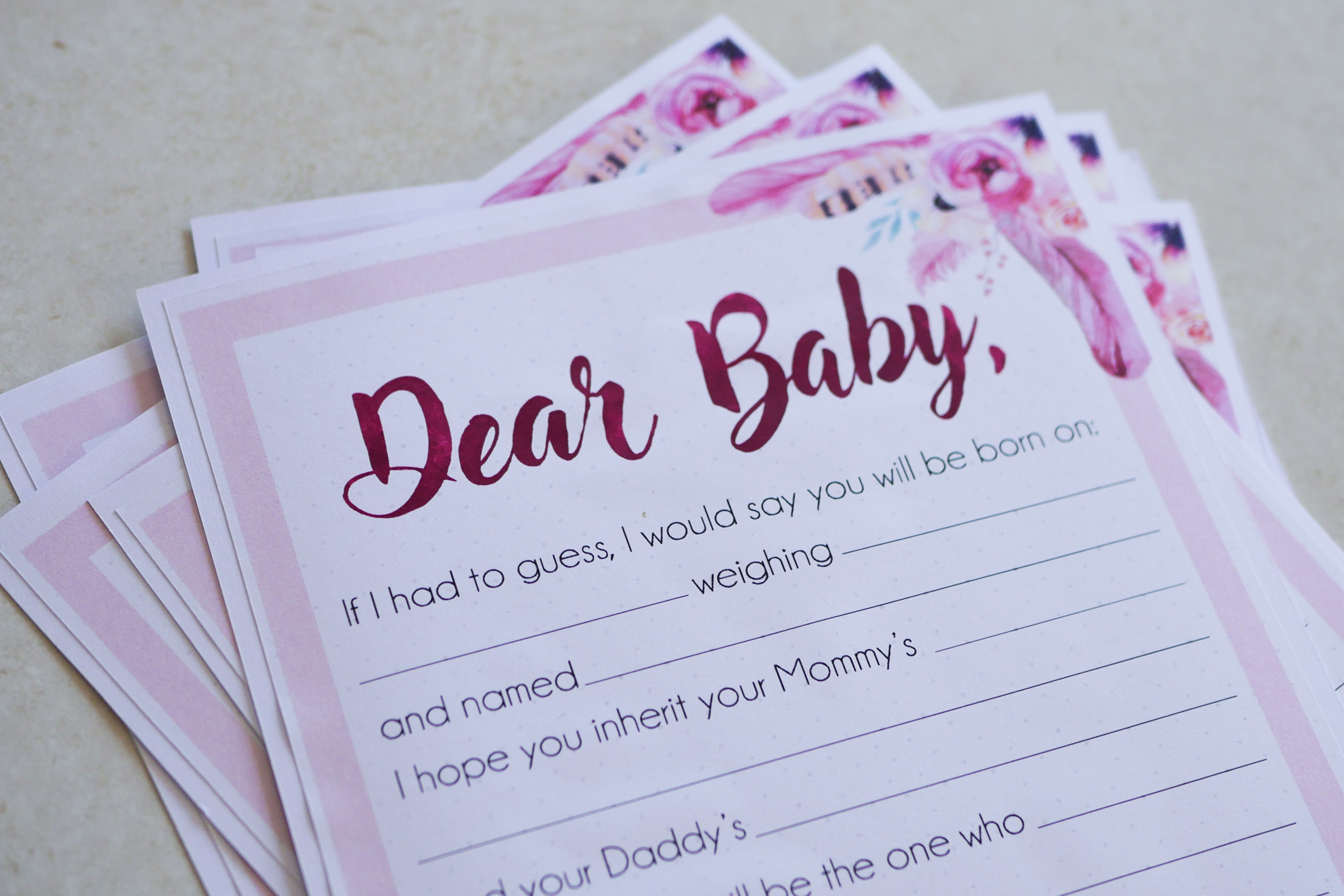 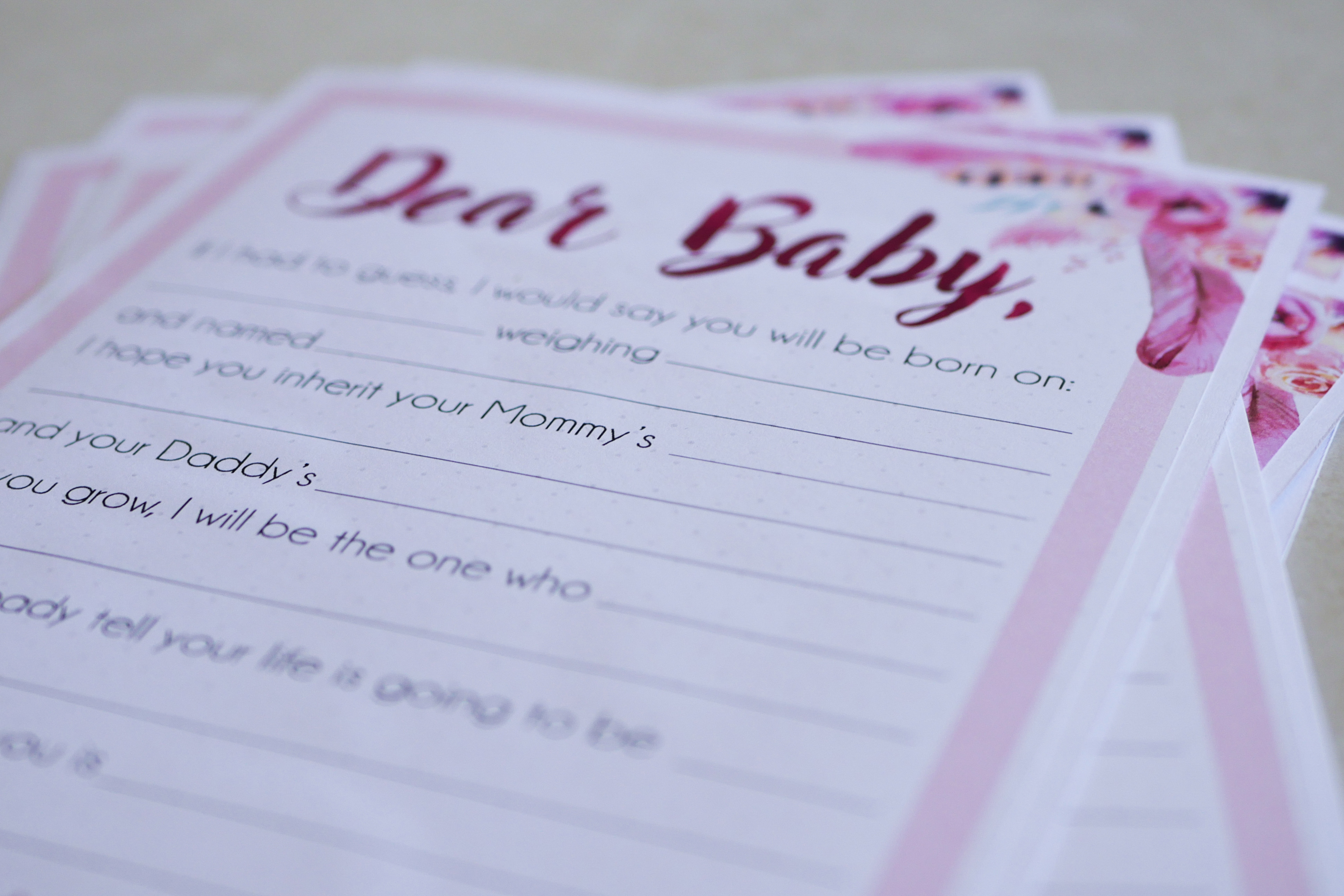 This was the last game we played and I probably left it a little too late so we didn’t complete all the questions. We got half way through and then I began to realise that people were starting to wane. I added up both teams points from there and the team with the most points won a prize pack that they could share out between them.

Baby Jeopardy is basically the same concept as normal Jeopardy if you have ever watched that. I know it’s not really a thing in Australia so it required some explaining on my part to my guests. The idea is that you give them the answer and they have to give you the question. For example, I would say, “a story about a boy who wears green tights and never wants to grow up…” The correct answer (or question) would be “What is Peter Pan?”

To play this game I divided the guests up into two teams. The team that got to go first was the team who collectively had the most children. They could then chose a category and a point total to go for and I would read them the corresponding question. 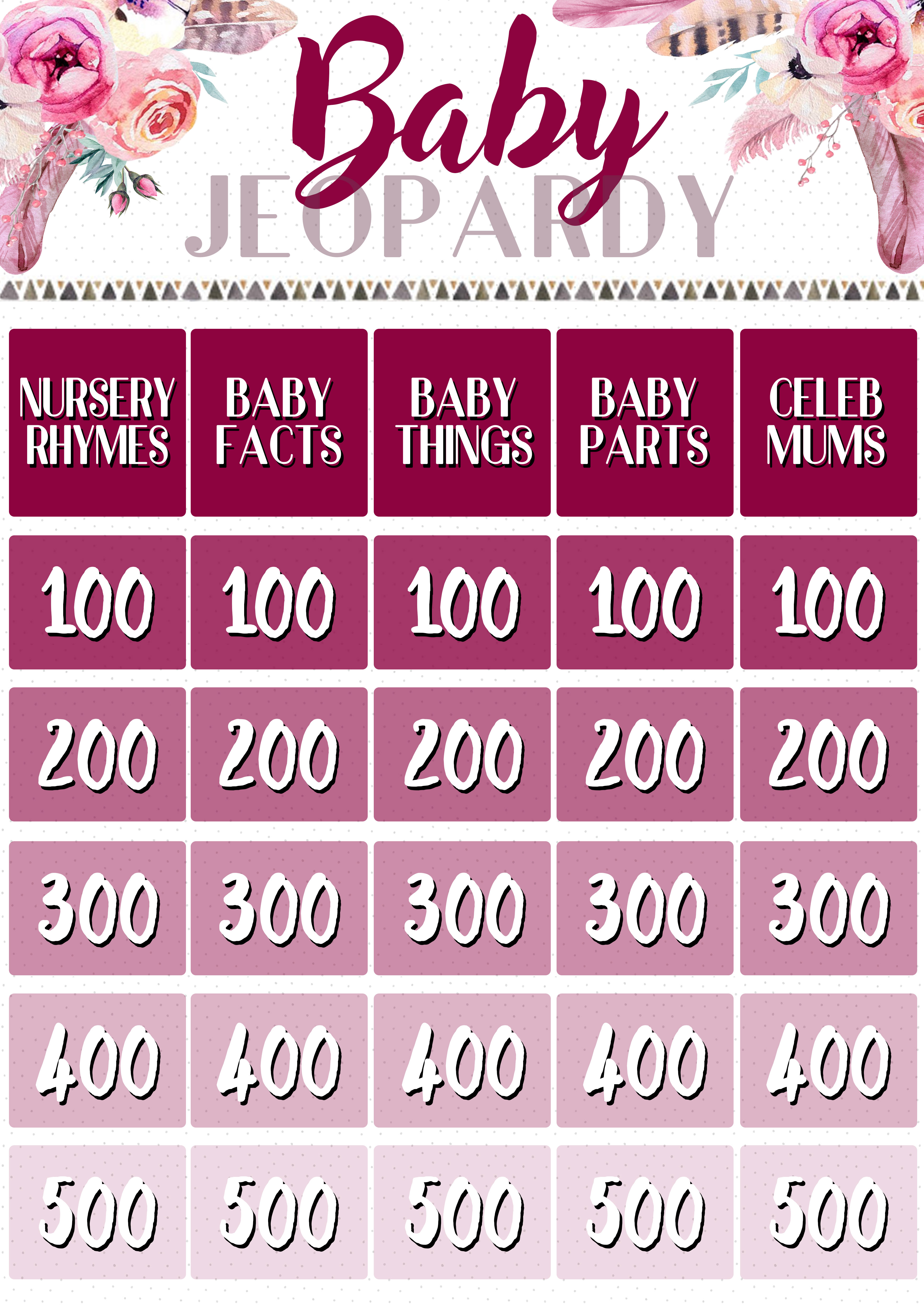 The categories are all baby related of course. I used questions and answers from Tulamama’s baby jeopardy game because I was too lazy/busy to go make up my own. They were possibly a little on the old side, especially the celeb moms category. It would be worth updating them if you have time. I printed an A3 copy of the score board out and glued it to some leftover cardboard I had. It still ended up being a little on the small side for everyone to see so I would recommend going bigger if you can.

As each category and point value gets answered, cross it off the scoreboard while noting which team got the points. If the team got the answer correct they got another go, whereas if they didn’t get it correct the other team got a chance to answer that same question. The turn then passed to them regardless of whether they got that particular answer correct. My plan was to keep going until all questions had been asked but we quit about half way through.

100: This lady uses silver bells and cockle shells to make her garden grow
Who is Mary Mary?

200: This fellow loved pumpkin so much he wanted to put his wife in one as well
Who is Peter Peter Pumpkin Eater

300: Little Tucker had to sing for this supper
What is brown bread and butter?

400: This guy is under the haystack fast asleep but if you startle him he will cry
Who is The Boy Blue?

500: This old lady swallowed a lot including a fly, spider, bird and cat. But this she swallowed last.
What is a horse?

200: Babies are born without this part of the leg
What is knee caps?

300: First sense that a baby develops
What is hearing?

400: Most babies are born in this month
What is September?

100: Conveniently holds all babies essentials
What is a diaper bag?

200: Helps babies sore gums when teething
What is a teething ring?

400: Versatile baby transport
What is stroller?

500: Hangs over crib while stimulating and soothing baby
What is a mobile?

100: We see a lot of this shape on Valentine’s Day
What is a heart?

400: Cute type of macaroni
What is elbow?

200: This reality star co-sleeps with her son while her partner sleeps in another bed
Who is Kourtney Kardashian?

400: This sexy city fashionista added twins to her family via surrogate
Who is Sarah Jessica Parker?

500: This mom has a multi-language daughter at age 3
Who is Salma Hayak?

All these games kept us very busy and were definitely enough to get everyone mingling. For the prizes I included a mixture of random things I found into little gift packs for each one, including candles, earrings, necklaces, a travel jewellery organiser, lip balms, other make-up products, make-up organiser etc. None of the items were too expensive and I figured that whoever won the prize would find at least one thing they enjoyed inside the pack and could share out the rest with others at the party if they felt so inclined.

You could go for a more baby themed prize approach if you wanted to but this was easier for me. I do think it’s important to have some kind of prize for the games even if it’s really small and inexpensive. It just feels like a bit of a waste of time trying, if the winner doesn’t get anything. But that’s just my opinion. Alrighty then, you should be fully prepared for your baby shower games now! Go out and have fun!

Other Posts in the Series