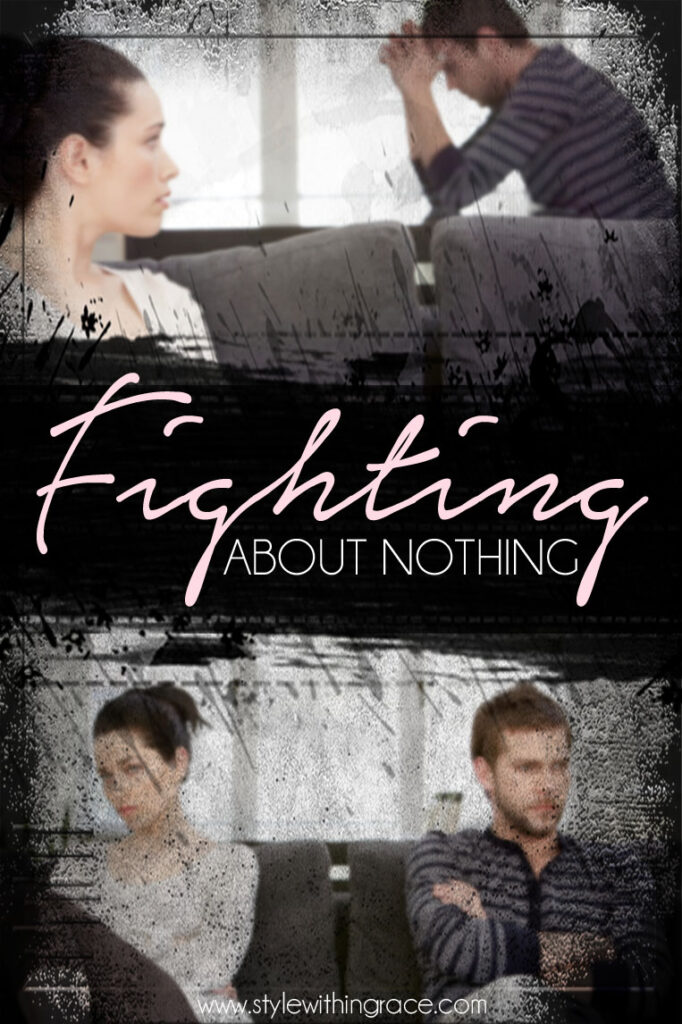 For some reason most of our “fights” occur on a Saturday. (I say “fights” with inverted commas because they are not like what I would expect a fight to be like, arguing with each other, getting angry etc. Instead it is just an awkward avoidance of each other for no apparent reason at the time.) I’m not sure why they occur on a Saturday but it leads to a very predictable chain of events. All of Sunday spent awkwardly in the same house but not together. Michael will be on his computer, with his headphones on engrossed in a computer game while I watch TV show after TV show.

Even if I could come up with something to say to him to make things better, I feel like I can’t interrupt him. Eventually it’s time to go to church. At that point I let Michael know that we need to leave in about 5mins and he says, “ I’m not going”, as if it’s a completely preposterous idea. If I know that friends are going to be there, I’ll head off to church alone. When I return at the early hour of 8:30pm Michael will already be in bed, asleep, as if especially to avoid me. I then tip toe around the house stewing on the events of the day until I go to bed. By the time I wake up the next morning Michael has gone to work and I don’t see him until that Monday night.

That’s like 3 whole days where I can do nothing but over-think every little detail that has conspired, trying to figure out what I did wrong, because he won’t tell me. When I do get the chance to ask him, “If everything is all right? If he’s ok?” He just says, “Yea” and that’s it. Even though it is blatantly obvious to me that something is up. It’s not just wondering what I did wrong but also, “Should I talk to him? What should I say? How do I make him tell me what’s wrong? Do I apologise for something I don’t even know I’ve done?”

I know I am not the only female who goes through this stressful bombardment of thoughts. When Michael and I got married we received a box set called For Couples Only by Shaunti and Jeff Feldhahn. I read both sections, For Women Only and also For Men Only because I was interested as to what they would say. In the For Men Only book they talk about how, for women, the deal is never closed.

“Your wife doesn’t permanently feel loved once the marriage papers are signed. Yes she knows you love her, but there are periodic times when her feelings need to be convinced and reassured.”

“It’s no surprise that women need to feel loved. What is a surprise is that buried inside most women – even those in great relationships – is a latent insecurity about whether their man really loves them and whether the relationship is ok.”

These feelings of insecurity are often triggered during times of conflict, withdrawal, (which is of course how men often respond to conflict) silence, (even if nothing’s wrong) and unresolved relationship issues. I heard during a seminar called Laugh Your Way to a Better Marriage by Mark Gungor that the reason men will withdraw during a conflict is because when their heart rate gets too high, their natural reaction is to attack. By withdrawing from us instead they are actually doing the noble thing. But us women who like to talk things through feel unloved when they do this. We start to wonder do they still love us?

“Almost every woman asked said she cared about her man so much that when this relational insecurity was triggered, it was very painful – sometimes almost debilitating – and it became difficult, if not impossible, for them to get it off their minds.”

This is pretty much what I was feeling. This painful relational insecurity combined with another thought they mention in the book, sums up perfectly what I was going through. Jeff Feldhahn explained that women’s brains are like a computer with many different windows open simultaneously, unwanted pop-ups intruding all the time. We have little ability to close out or ignore any of that mental or emotional activity until we consider it resolved. When you have a “fight” with your husband, this is the worst annoying spy-ware pop up of all. No matter what you are doing all day long, no matter how many times you try and exit it or minimise the window, it just keeps popping up in front of all the other tasks and thoughts you’re having.

Jeff’s advice to men about to how to avoid all of our pain and suffering:

During conflict, reassure her of your love.
During the conflict affirm your love as real and enduring, quite separate from your anger or her behaviour. For instance say, “I’m angry right now and I need some space but I want you to know we are ok.”

When you need space, reassure her that it’s not about her.
State “Honey, right now I just need some time alone – I am just out of sorts. It has nothing to do with how I feel about you.” That will make it much easier for her to let you have space without misinterpreting your need.

That reassurance during the conflict is the one thing that every woman said would make all the difference. 95% of women said this step would diminish or even eliminate the emotional turmoil on their part. A few weekends ago we got into one of our typical “fights”. I had no idea what had triggered it but there was a distinct awkwardness between us. The next day we barely said two words to each other. My brain went crazy thinking of all the possible things I could have done to make him annoyed at me. After my long and arduous pondering I thought I had figured it out.

Saturday afternoon, I was writing up some entertainment that we were organising for a friend’s engagement party because Michael was out playing laser skirmish and hadn’t finished. He got home and I mentioned to him that it was slightly confusing me. His response was, “It’s not confusing”. He probably didn’t mean it like this but what I heard from his tone of voice was, “You are stupid”. I was then like, “Fine, you can finish it. I’m going to have a shower.” After my shower I had calmed down and told him, “I‘m sorry, I overreacted a bit”. I thought for sure it was the stress over the engagement party game that started our awkward routine. It wasn’t until much later that I found out what was really annoying him.

We were all ready to go to the engagement party and were just about to walk out the door. I had my heels on, my handbag packed and was carrying the gift but we couldn’t leave! Michael was on a mission to kill flies. I was just staring like, “Why is he doing this now? We are just about to walk out the door, we are going to be late.” After about 15 mins, I realise we are not going anywhere any-time soon. So I put everything down and take my shoes off again. Now we are looking for where some dead meat must be hiding because the flies have to have come from somewhere.

The only option left is behind the dishwasher. So in his suit Michael gets down on his hands and knees and starts trying to pull it out from under the counter. It doesn’t come easily because of the pipe attached in the back. So he gets the scissors out and starts clipping the zip ties that hold it in place but it’s still not coming out. All the while I am standing there thinking to myself, “Can we please leave now? I am more than happy to clean the house top to bottom tomorrow but can we go to the engagement party now?”

To me the flies were an issue that could wait to what I thought was a more appropriate time and something that wasn’t my fault but Michael was annoyed that I just stood there and didn’t help kill the flies. This baffles me because it didn’t even register as a possible issue in my extensive over-thinking. Essentially we were “fighting” about nothing. Something that could have been resolved or even avoided completely, with one simple statement, “I don’t feel comfortable leaving until all the flies are dead. Could you please help me kill some flies?”

Even just the question at the end would have gotten me killing flies. Then we wouldn’t have had the issue. I guess it’s never that easy when it comes to feelings though. But here’s hoping that next time we can avoid all this. Even after this event, when I had asked him if he was alright, if he could have just said, “I’m a little annoyed right now and need some time to process but I still love you,” I wouldn’t have had to stress all weekend long.

I guess the point of all this is to:

1. Let all women out there know you are not alone in your over-thinking.
Hopefully, once we know how our minds work and that we are not the only ones who think this way, we will be able to better explain this to our men before conflict arises.

2. Encourage you all out there to really work on your communication to avoid non-essential “fighting” about nothing.
Life is too short to have 3 day conflicts about things that really don’t matter.

1 comment on “Fighting About Nothing? (My insights into lovers tiffs)”